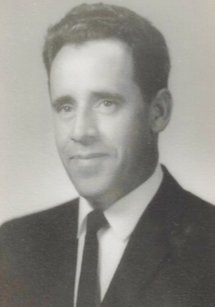 He was born Feb. 3, 1928, to Mary (May) Wettstein and Henry Wettstein in Pittsburg, Kansas, where he attended schools and was a lifelong resident.

On Dec. 24, 1947, he was united in marriage to Lorraine Holland. They were married 37 years when she passed on Sept. 7, 1985. They had one child, a daughter, Hope. Fred worked for KG&E for 40 years as a meter reader and later a bill collector, retiring in 1991. After retirement, he enjoyed working for an additional 14 years in Branson, with his highlights being at the Country Tonight Show and the Branson Scenic Railroad.

Fred was a veteran that served in the Navy. After his discharge in December 1947, he was a member of the Naval Reserves.

Fred was a devoted father, grandfather, and friend. Everybody loved him. He was very social and never met a stranger. He liked to travel and enjoyed driving. Some of his fondest memories of his youth were driving go-karts, flying, and riding motorcycles. He continued his motorcycle rides throughout his life. Later, he enjoyed visiting casinos where he could be with friends. He was most happy when he was spending time outdoors, especially with his passion for fishing.

He is survived by his daughter, Hope Harmon, and husband Joe of Pittsburg; his grandson, Brad Harmon and Kelly Holt of Pittsburg; and grandson Garrett Harmon and wife Christian of Springfield; as well as numerous nieces and nephews.

Graveside services will be on Saturday, Oct. 1, 2022, at 10 a.m. at Mt. Olive Cemetery in Pittsburg. Following this service will be a celebration of Fred's life at The Lodge, 2312 W. 4th St. in Pittsburg. Expressions of sympathy may be in the form of a donation to the Southeast Kansas Humane Society.