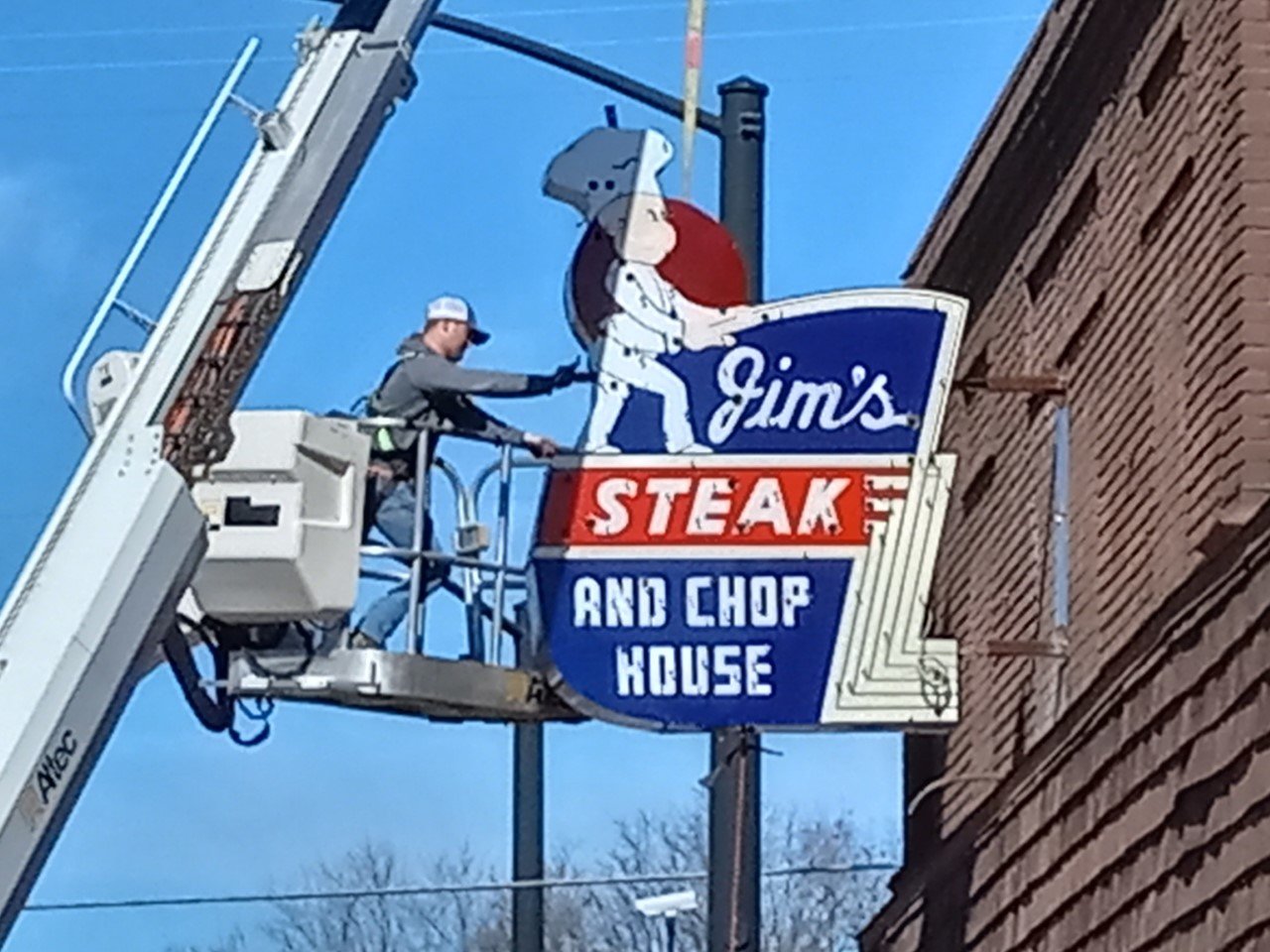 Under new ownership for just over a year, the former Jim’s Steakhouse is now Jim’s Steak & Chop House.
JONATHAN RILEY / THE MORNING SUN 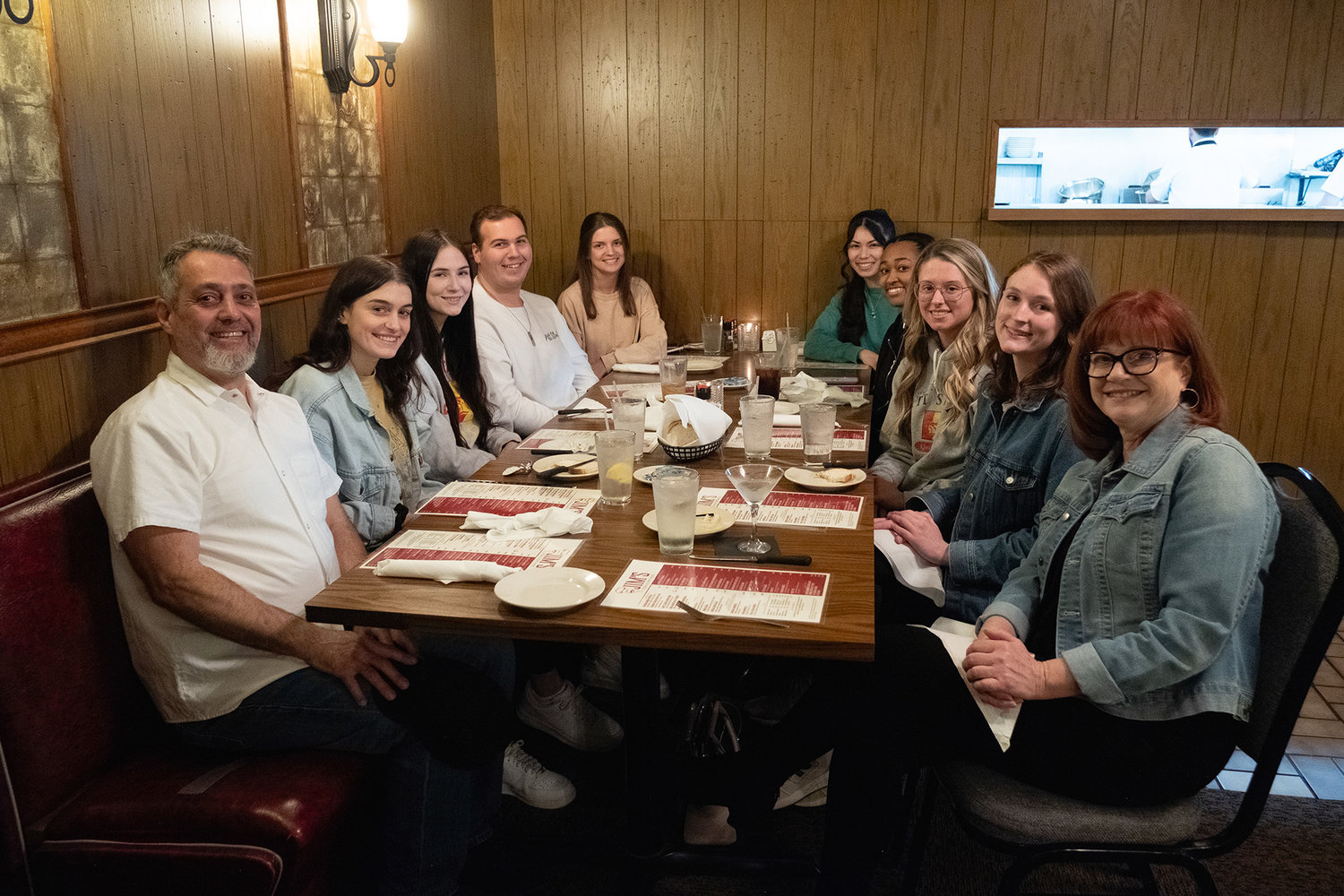 PITTSBURG, Kan. — A year after taking over Jim’s Steakhouse (now officially Jim’s Steak & Chop House), Frank Caputo says he has had his share of challenges in restoring the business to its former glory, but those are challenges he’s been willing to accept.

In the year that has passed since then, Caputo has made a few changes, and more are still to come, but he has also purposely stopped short of remaking the restaurant into something that would be unrecognizable to longtime patrons. Some of the changes Caputo has been working towards, in fact, have been to bring back original menu items, such as chicken-fried steak, that he wasn’t able to serve at first.

“There’s a cult of chicken-fried steak people, and this place had them. So when we didn’t open up with the chicken-fried steak on the menu, folks were — they were beyond not satisfied,” Caputo said in an interview this week. “What everybody didn’t know was that the piece of machinery that has been cutting those steaks for all these years, well it was broken.” Caputo added that the piece of equipment was over 80 years old.

“I needed to find the right person to fix it, to repair it, and finally I did,” he said. “And then as soon as I did that, we started running it as a special, and then we did our menu change and it went right on there.”

Other items that have been added to the menu and are selling well include fresh fish, Caputo said, as well as the pork chops spotlighted in the new Jim’s Steak & Chop House name, which was also changed partly for legal reasons when Caputo and his father-in-law Chris Pakitsos bought the business from former owner Leroy Castagno.

“So we added chops, and we’re getting ready to start serving bone-in steaks, because we don’t have any bone-in steaks other than the pork chop right now, and Leroy was known for having the porterhouse and the T-bone steaks as well,” Caputo said.

He is also looking to potentially set up something along the lines of a deli counter near the entrance to the restaurant, which would include a refrigerator, scale, packaging and a cash register.

“I’m trying to set up an area up front here where I can start to offer a different variety of steaks that aren’t on our menu. Not necessarily dry aged, but fresh cut steaks. It could be a tomahawk, it could be a 26-oz. ribeye with a bone,” Caputo said. Customers could buy steaks to go, “or they could say that they want to have that for dinner and I’d cook it for them,” he added.

Caputo has begun looking into the possibility of making some other changes to the interior look and setup of Jim’s as well. Earlier this year, Jim’s participated in a project with students majoring in interior design at Pittsburg State University, who proposed renovations to the restaurant ranging from lighting changes to knocking down the wall that separates the lounge area from the dining room.

“We’re going to be making some furniture changes,” Caputo said. “We’re going to be upgrading our chairs, some lighting, and décor.” He added that he also plans to change the restaurant’s tables, as well as the carpet in the lounge and entranceway area. Other changes proposed by the PSU students may be implemented at some point, but Caputo has not made any final decisions on those.

“It was great also to work with students in taking my ideas and some of my thoughts and passing it on to them and seeing how their ideas blossom out of my ‘what-ifs,’” Caputo said.

Since then, Caputo has taken initial steps toward working with another group of students — those involved with the Show Me Youth Ag Academy, a nonprofit based in Lamar, Missouri. Currently, when it comes to its steaks, Caputo said, Jim’s exclusively serves Certified Angus Beef.

“I’ve used it my whole career, mainly because of the consistency of the product,” Caputo said. “It’s way more consistent than any of the other beef that’s out there.”

Show Me Youth Ag Academy students, however, have made a cross between a Red Certified Angus Beef cattle breed and a Japanese, or Wagyu, cattle breed, which caught Caputo’s attention.

“The fat in a Wagyu beef is supposed to be better for us cardiovascularly,” he said. “It has a different type of fat molecule, and the beef is a little bit more intense beef, but it’s good.” Caputo added that he is looking into potentially serving steaks from this new hybrid cattle breed at the deli counter at Jim’s, once he gets it set up.

Reopening a locally iconic steakhouse in Southeast Kansas may be a new challenge for Caputo, but when it comes to the restaurant business and the hospitality industry, this is not his first rodeo.

Caputo was born into the pizza business when his parents immigrated to the U.S. in the late 1950s, he said. They would buy buildings to rent out apartments upstairs and put storefronts selling pizza below. It was the start of a long career in the restaurant business for Caputo, who went on to graduate from the Culinary Institute of America, and in the years since has cooked for celebrities and U.S. presidents.

“I’ve opened up 30 different operations from the ground floor,” said Caputo, who is originally from Pennsylvania. “I bounced around a lot, but I accomplished a lot.”

That includes involvement in opening The Brass Onion, a popular restaurant in Overland Park’s Prairiefire district, in 2016. He also served as executive chef for the Kansas City Royals at the Crown Club at Kauffman Stadium up until March 2020, when the COVID-19 pandemic disrupted the baseball season.

“I fed about 250 people every single day there was a game,” Caputo said. “They moved me right out of baseball season right into football season, so the year that the Chiefs won the Super Bowl, I cooked for the Chiefs that whole entire year.”

Before that, Caputo spent several years working in restaurants in the exclusive resort areas of Naples, Florida, and Kiawah Island, South Carolina. More recently, before moving to Kansas, from 2008 to 2015 Caputo worked for Cancer Treatment Centers of America in Phoenix, Arizona, where he had an opportunity to become involved not only in preparing and serving food, but growing it, in a unique arrangement that led to Caputo making an appearance on CNN.

“I was able to build a 69-acre certified organic farm right on our property where the hospital sat, and we grew over 80 different types of fruits and vegetables on that 69 acres,” Caputo said.

That experience gave him the idea of doing something similar with Jim’s. Recently, he said, he met with Brad Fourby of Leafy Green Farms, a local indoor micro-farming operation that grows organic vegetables in a shipping container.

“I sat with him and he’s putting together a list of some items that he thinks he might be able to grow that we’ll be able to use here on our menu as well,” Caputo said. “It’s little by little trying to incorporate the community into the business and us into the community.”

Caputo sees more changes coming to Jim’s in the future, as well as more opportunities for community partnerships. He said he hopes to add a roasted pork item to his menu before long.

“But with that I want to do roasted vegetables, and I would love to find a farmer here that grows the larger squashes — butternut squash, acorn squash — even onions, any of the winter vegetables,” he said. “I just don’t have that connection yet.”

A year into his effort to rebuild Jim’s, despite decades of experience, Caputo said the restaurant has been one of his more challenging projects.

“I’ve gone through this a lot of times in my career. I’m not a young kid who just decided to open up a restaurant,” he said. “This is a bear to handle, physically, mentally and financially. It's not a cake walk for me.”

Still, even with the bumps in the road that come with opening any business, the greatest unexpected aspect of reopening Jim’s, Caputo said, has been the support he’s received, and continues to receive, from longtime fans of the steakhouse.

“The surprise was the actual response that we got from the community, and it was great. It was great. And it still is, from the very beginning,” Caputo said. “’Overwhelmed’ is not the word, I wasn’t overwhelmed, I was elated.”